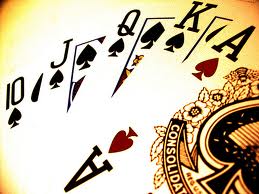 Some of our artists have just started playing poker for the first time. Tylarik went to Vegas and got his introduction to the game and Brizite has hosted a game or two at one of his homes in Houston. Personally, I know very little about the game so all the fuss and attention grabbing is a little beyond me at this point. In addition to those new developments, while at the studio recording a track on one of our newest artist, I recently overheard a conversation between Tylarik and Brizite where they plan on teaming up to record a song based on gambling, specifically the game of poker.

So I thought to myself, OK here comes another one of those “Bling Bling” songs. You know, one of those songs that have no content and incessantly repeat chorus lines like “ I got that Rolex and more money than my baby’s momma new boyfriend,” or something like that. But after a discussion with them and a fresher evaluation of my initial assessment, I came to a different conclusion. After all there are many hit songs based on money and gambling. A few that come to mind immediately are: “The Gambler” by Kenny Rogers, “Easy Money” by Billy Joel, and “Money for Nothing” by Dire Straits.

So, upon his insistence, Tylarik and I met again and discussed going into the studio and making a new recording based around the poker playing lifestyle but with a view towards taking the old Hop-Hop cliché “Bling Bling” to a whole new level. He was very convincing and had already completed two of the three verses that he plans to use. To say the least, I was very impressed with his first draft!

Now he’s got me thinking this just might work! Even though I’m still a little skeptical and apprehensive about gambling away my hard earn money, I believe I’ll delve into this gambling world by maybe making a few more inquiries, buying a “dummies guide to playing poker,” or better yet trying out one of those online gambling casinos like partypoker .

What y’all think? Holla back!!!