Two years since Adam ‘MCA’ Yauch was diagnosed with cancer, the Beastie Boys have burst back with a rap album that revels in fun. They pick up where they left off with Angus Batey 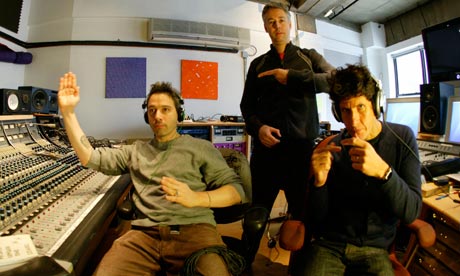 ‘More than ever, people wanna listen to music and have a good time’ … The Beastie Boys (from left): Ad-Rock, Mike D and MCA. Photograph: Phil Andelman

A friend was givin’ me a hard time about this the other day,” says Adam “Ad-Rock” Horovitz. “They said, ‘You’ve been doin’ this since high school – how have you only had eight albums? That makes no sense.'”

There always seems to have been something that’s stopped the Beastie Boys operating on the sort of timescale most bands stick to. The brat-rap superstars of the late 1980s have grown into shrewd music-business mavens, with record labels, magazines and film production companies vying for their creative attention; and when they have got around to making albums, those records have sketched out new possibilities, reminding anyone who cared to listen that the hip-hop genre they grew up in is about taking sounds, styles and inspirations from across the musical map and turning them into something new and definably your own. But, as Ad-Rock’s friend pointed out, eight LPs in almost 30 years is a pretty poor return.

Two years ago, though, it looked as though Ad-Rock and bandmates Michael “Mike D” Diamond and Adam “MCA” Yauch were going to break into what was, for them, a sudden gallop. Barely two years after their previous album – admittedly, an all-instrumental affair called The Mix-Up rather than a “proper” LP – they had finished a new record. Called Hot Sauce Committee Part One, it was to be released in the autumn of 2009. That June, the trio undertook a promotional trip to Europe, giving interviews to media (including Film&Music) in which they explained that Hot Sauce Committee Part Two – “the weird shit” they couldn’t fit on to the album – would arrive within a year or so of Part One, possibly as a series of 7in singles.

Then, on 20 July, in a video posted to YouTube, Yauch broke the news that he had been diagnosed with cancer in the parotid gland and a lymph node in the left side of his neck. Surgery would be routine, but the record would be postponed.

In October 2009, Yauch told the Beasties’ email list he was “feeling healthy, strong and hopeful that I’ve beaten this thing”. A year later, they announced, first, that Hot Sauce Committee Part One had been shelved but that Part Two would be coming out “on schedule” in the spring of 2011; then, as Yauch wrote: “Strange but true, the final sequence for Part Two works best with all its songs replaced by the 16 tracks we originally had lined up in pretty much the same order we had them in for Part One.” Like, d’oh! 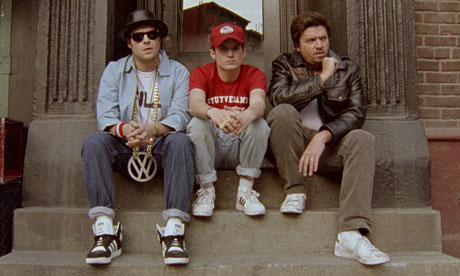 Suitably ridiculous … Seth Rogen, Elijah Wood and Danny McBride in Fight for Your Right Revisited.The widespread conclusion – based on a confirmed release date, and the back-to-normal goofiness of the announcements – was that Yauch had recovered. But this wasn’t entirely the case. “Reports of my being totally cancer-free are exaggerated,” he said in a statement this January. “I’m continuing treatment, staying optimistic and hoping to be cancer-free in the near future.” Speaking now, Yauch’s bandmates confirm their friend’s medical problems are not yet over.

“He’s doin’ OK,” Horovitz says. “He’s still in treatment, so it’s not 100%. But things are lookin’ good. We’re not touring, we’re just getting the record out – and we’re not making any plans until he is better. Which is definitely gonna happen.”

“It’s a very strange thing,” says Diamond. “Unfortunately, we’ve had a high attrition rate of friends growing up in New York, but more from drug overdoses and crazy shit like that. This is, actually, the first time that a friend who is a contemporary – basically one of my best friends for life – called me up to say: ‘Hey, I’ve got some really bad news,’ and having a really serious illness. And when you’re friends for a long time, and one of that group of friends gets a very serious, potentially terminal illness, it’s just kind of like … It’s a game-changer, if you will.”

Though they are a band who have built a career out of behaving like naughty schoolboys, the Beasties haven’t shied away from serious themes. Galvanised by Yauch’s travels to the country, they staged several huge concerts to support the cause of a free Tibet, and between the one-liners and pop culture references, their best songs are often peppered with sociopolitical seasoning. So if these eternal teenagers’ response to their close encounter with mortality is to laugh a little louder, party a little harder, that should come as no surprise.

Hot Sauce Committee Part Two revels in the kind of instinctive lyrical and musical fun the Beasties seem to have made their own. In 2009, they’d explained how its joie de vivre was in some ways a response to the times of its creation. The same thing had happened with their previous rap album, To the 5 Boroughs – a record that rang with the defiance of liberal New York natives responding both to the terrorist attacks on the city in 2001, and to the way a rightwing government dealt with them.

“During the course of making To the 5 Boroughs, the US was going round invading different countries, and we had a complete moron as president,” Yauch told Film&Music in 2009. “We’d be on our way to the studio and either walking past soldiers on the street in New York, or seeing newspapers about us invading or threatening to invade some country, and I think a lot of that ended up feeding into the mood of the record. But with [Hot Sauce Committee], part of it was done much more with the thinking that Bush’s term was almost over, and the latter part was recorded knowing that Obama had been elected. And there’s probably a lot more sense on our part that we can be free to just talk trash, because someone else is gonna be responsible for what goes on in the world. I definitely feel like, could it all be going this right? When I hear Obama speak, most of the time I agree with what he’s saying, and I trust him. And it’s almost a strange feeling, because I’m so accustomed to not trusting or liking politicians.”

“Yeah,” agreed Horovitz. “It’s weird to have things in common with the president. Seriously! Dude watches The Wire, he plays basketball, he’s tryin’ to quit smoking …”

Two years later, with the political atmosphere poisoned by conspiracy theories and Obama’s consensus-building stymied by the confrontational stance of the Tea Party right, the Beasties’ euphoria could seem out of kilter with the times.

“In the time we made To the 5 Boroughs there was a political seriousness because of what was happening in the world,” says Diamond. “And I guess if you look at the last two years, the big thing you would point to would be an economic seriousness, as well as, in the last six months, the social and political reordering of a lot of the world, specifically in the Middle East. All that being said, more than ever, I think, people wanna listen to music and have a good time.”

“We’re all still very optimistic about Obama here,” Horovitz says. “We also knew that it wasn’t like everything was gonna change the minute he took office. We knew that it was gonna be a struggle; and the right wing in America would go crazy. But I don’t think the album would be that different if we were recording it today, as opposed to two years ago.”

The enforced delay has brought some benefits. After periodically revisiting the new tracks, the group began to feel that the production – which, as with To the 5 Boroughs, they’d handled themselves – could do with a bit of sprucing up. So they called in an outsider, the French producer Philippe Zdar, to remix the album.

“When you get to a point where you’re not beholden to a record company,” Diamond explains, “then it’s up to you to say, ‘OK, enough knob-turning, we’re done.’ When we talked to you two years ago, we had taken our best shot and thought we were done. I’m actually really glad: it’s almost like we got to do the reissue of the record without it ever coming out in the first place.”

They have been able to give the album a typically over-the-top launch, too, with the video for the first single, Make Some Noise, assuming epic proportions. Yauch had begun to foment an idea for a short film based on the 1986 Fight for Your Right video, and last November they shot the Yauch-directed film Fight For Your Right Revisited, filmed in New York with a cast of suitably ridiculous proportions. It features two alternate lineups of ’86-attired Beasties (Elijah Wood, Seth Rogen and Danny McBride in the first; Will Ferrell, John C Reilly and Jack Black in the second) having a breakdance battle that degenerates into – literally – a pissing contest on a Manhattan street corner, before the real Ad-Rock, Mike D and MCA turn up, dressed as cops, and bundle them all into a police van.

A quarter of a century since their emergence as gifted rappers and superlative satirists, both film and album are perfect reminders of why so many people still care so much about the Beastie Boys. They may look like they’re making it all up on the spot, but those in-jokes and elaborate rhymes are crafted with the precision and care of masters of the art. This is the secret of their success: as seriously as the trio take the job of getting the music, the lyrics and the accompanying visuals right, the end results look and sound like ebullient, uncomplicated fun.

Personally, as well as politically, the new LP still gives an accurate reflection of the feeling in the Beastie camp today, even though it was made before the discovery of Yauch’s cancer. While there are no plans beyond giving him time to get well, Diamond and Horovitz agree that, if their friend’s illness affects their music at all, it is likely to push them to ever more ludicrous extremes.

“I have a feeling the next record is gonna be the most insane party record you ever heard,” Horovitz says. “Because if you go through something like what Yauch’s goin’ through … I mean, shit. After that, you must feel pretty good.”

“I’m always careful to even guess, at any juncture, about things before we do them,” Diamond says. “But in an odd way I almost feel that it could more intensify the goofing-around aspect of what we make together. Because that’s the release – that’s what you really value it for. When we’re all together, are we gonna want to have fun together, and remember that? Or are we gonna wanna kind of hang our heads low and mope around? No, we’re gonna wanna really enjoy it, and savour those moments.”